i started lady midnight at the beginning of this month and read a few pages here and there with the little time i had to read. then one day i sat down to get a few pages in and read more than the entire last half of the book in one go. it was insane, heart-wrenching, beautifully written, funny, and genius all at the same time. everything that cassie had written in this book exceeded my expectations. with that, let’s get into the review 🙂 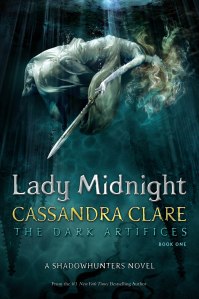 The Shadowhunters of Los Angeles star in the first novel in Cassandra Clare’s newest series, The Dark Artifices, a sequel to the internationally bestselling Mortal Instruments series. Lady Midnight is a Shadowhunters novel.

It’s been five years since the events of City of Heavenly Fire that brought the Shadowhunters to the brink of oblivion. Emma Carstairs is no longer a child in mourning, but a young woman bent on discovering what killed her parents and avenging her losses.

Together with her parabatai Julian Blackthorn, Emma must learn to trust her head and her heart as she investigates a demonic plot that stretches across Los Angeles, from the Sunset Strip to the enchanted sea that pounds the beaches of Santa Monica. If only her heart didn’t lead her in treacherous directions . . .

Making things even more complicated, Julian’s brother Mark—who was captured by the faeries five years ago―has been returned as a bargaining chip. The faeries are desperate to find out who is murdering their kind―and they need the Shadowhunters’ help to do it. But time works differently in faerie, so Mark has barely aged and doesn’t recognize his
family. Can he ever truly return to them? Will the faeries really allow it?

lady midnight is the first book in cassandra clare’s third series (the dark artifices). her two other series are called the mortal instruments (which takes place around 2007), and the infernal devices (which takes place in the 1800’s). this book takes place after the events that occurred in her first series (the mortal instruments). you do not have to read the first two series in the shadowhunter books in order to read lady midnight, but it is highly recommended. characters and plots from the first two series are mentioned in lady midnight, so you’ll be missing out if you don’t read them! you’ll also miss a lot of amazing adventures and kick-ass characters.

cassandra clare has also released a set of novella’s, called tales from the shadowhunters academy), available as ebooks. you don’t have to read these before lady midnight either, but in my opinion, i think you definitely should. one of the subplots in lady midnight connects to some of the novellas (*squeals*) and you won’t want to miss out on that! although they are only available as ebooks as of now, a hard copy of the novellas will be released as a book sometime this fall.

END_OF_DOCUMENT_TOKEN_TO_BE_REPLACED

i wasn’t exactly tagged to do the hamilton tag but i’m just gonna do it anyways because hamilton is absolutely amazing. i recently started listening to hamilton (at the beginning of april i think) and it has CONSUMED MY LIFE. if you haven’t listened to the soundtrack i 100,000,000% recommend it because it’s amazing, catchy music yes, but it’s also extremely interesting to learn about. END_OF_DOCUMENT_TOKEN_TO_BE_REPLACED

recently i have been thrown back into the bookstagram community when i decided to return to taking pictures of all of the amazing books and sharing all my thoughts and feels with everyone. i was going through my instagram feed when i stumbled upon a few bookstagramers (celinereads, myriadinklings, twirlingpages, and forevermint to name a few) who all run absolutely AMAZING blogs. so, i decided to give it a go with my own blog. hopefully i’ll make some new kick-butt friends along the way!

to sum me up in 3 words it would probably be: i love books (was it obvious?). other than that, i like to type in all lowercase or ALL UPPERCASE because why not? i’m also a bit of a grammar nazi around my friends and family *shrugs*.  some of my non-reading hobbies are painting, drawing, and marathoning (netflix). that’s pretty much all there is to me, seeing as most of the time i’m reading, taking pictures of books, or researching bookish things.

“A reader lives a thousand lives before he dies. The man who never reads lives only one.”

i think i’ve been reading for a very large chunk of my life. when i was little, my mom would always read to my brother and i before bed (the magic tree house series was probably the first books i was interested in, around 7 or 8). after that, i sort of just continued reading myself. i was probably in about 5th or 6th when i picked up harry potter and the sorcerers stone, not knowing where that bring me today. harry potter will always have a very special place in my heart for being the very first young adult series that i read, eventually getting me into this absolutely WONDERFUL community that i’m glad to call myself part of.

with that, i hope you all enjoy my blog. i will be posting book reviews, tags, updates, and other fun bookish things. feel free to comment, request, and email me. i’d love to meet you and hopefully meet many more friends along the way!

hiii! my name is katie and i'm a bookstagrammer and book blogger. i love talking about all the books with you guys! i'm basically your not-so-average teenage girl who loves to read and share my thoughts and feelings with you :) feel free to DM me on instagram or shoot me an email if you want to chat!